Jeff made the original announcement of the meeting on lugnet.org.us:

Hello everyone! The next meeting of the Northern Virginia Lego Train Club (NOVALTC) has been set. We will be meeting on Thursday, November 4 at 5:30pm, in Rosslyn. If you are interested in joining or visiting, e-mail me or join the NOVALTC Mailing List at: <www.onelist.com>

We Hope to see you there!

Stephen followed up with a Usenet post announcing the meeting on rec.toys.lego. His first reaction to the meeting:

...Well, I was waiting a bit to see if any others from last nite would get to subscribe before I sent out my message, but I guess they wont! :-)

...Last nite was GREAT!! We had as many new ppl as we did old (not that old means much with us! :-) And it was fun meeting new ppl to share the obsession with. I cant wait for the pics to come back so I can see what all we did in full techni(c)color.

...I cant believe we had so much track! but that's just a portion of it too... at this rate, we will have that community room floor filled in a few more months (dont forget to pick up a pack of straits with every order :-) And that 20 car train was funny going up and down that hill (someone figgure out a way we can keep it from accelerating so fast on the way down).

...Cant wait to do it again. I like the idea of a saturday build-a-thon. Pick a weekend, I'm likely free!

...see u guys at the grand opening!

The description from the previous edition of the web site, only slightly edited:

The meeting was a huge success! We ended up with 10 people, with as many new members as old! Even so it was more like meeting old friends, although Tom did seem overwhelmed with meeting so many other adult LEGO® fans! :-) 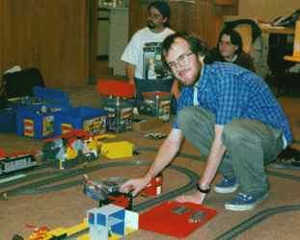 Chris adds cars to the track

Chris brought his excellent model of an Erie Lackawanna GP-35 diesel and a station, and powered up his laptop loaded with LeoCAD and lots of his ideas for buildings and models (he's got some great switching stations planned). Jeff brought lots and lots of his sets (including a fantastic vintage Main Street) and MOCs (he has enough ships to overpopulate our planned port). And Denise let us play with some of her huge collection, so most everyone else got to have fun building some fun “spur-of-the-moment” things for our layout. Most amazingly, Chris remembered his camera! 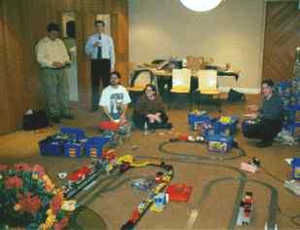 We set up an extensive triple-looped layout all over the floor. We ended up with two of the tracks crossing each other in a couple places, leading to fun when the trains met (a frequent occurrence!). There was a train or two running all the time (including a hideously long 20 car, three engine monstrosity!)

We made a few plans for the upcoming GATS show in Gaithersburg, Maryland (next February 26 and 27), with everyone thinking and talking about models and buildings and other things they can build to fit in the display. The show looks like it will be the first big show for us, and while we won't have a great layout, we will make a good showing, especially with 10 people adding to the table. 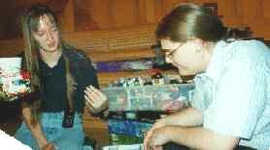 Denise and Jeff scope out parts

The big news of the night was the new LEGO® Store opening up in the Potomac Mills Mall! Lots of us are going to be there for the grand opening to raid and plunder our new local gold mine! I personally can't wait to see the people at whatever restaurant we hit afterwards when all these adults show up with their new toys and play on the tables. :-)

...Woohoo to all our new members!

…back to the top of the page

An Erie-Lackawanna GP-35 portrayed in LEGO®, by Christopher Tracey

Here is the model of a GP-35 that I built over the weekend. I guess it is my first real train engine, if you don't count the very lame-looking black and red affair I built a while back. I would appreciate any feedback that you have about the design.

I had to use LEGO® brown instead of burgundy, I think the brown fits in quite well. I used up almost all of my brown bricks in this model, luckily many of the EL 's cabooses were red.

My model is based on an EMD GP-35 run by the Erie-Lackawanna railroad.